skip to main | skip to sidebar

The importance of Kentville

“It’s not for me and you…but for our children…and our children’s children…if they’re going to have a world they can live in” says Mayor David Corkum of the Town of Kentville, launching the town’s anti-idling campaign on January 31st.

The Children’s Clean Air Network applauds the move and was instrumental in its launch this past week.

The mayor’s words are vital for children for a number of reasons.

First and foremost, it shows the town is prepared to “walk the talk” to address the huge flow of toxins and greenhouse gas pouring into our air from needless idling. This will make the town’s vehicles and managers accountable to the public, while demonstrating leadership on the issue. No other mayor in Nova Scotia has taken this crucial step.

This gives the town credibility to pursue and promote its public education campaign. It’ll also build public support for an eventual bylaw—which wouldn’t be possible otherwise. How can the town ask its citizens to stop idling while its own fleet wastes fuel and pollutes the air?

Kentville's lead also creates peer pressure among other communities in Nova Scotia to follow their example.

Another reason the mayor’s words are vital is because it gives children a voice in an area that threatens their health and their future.

The message children want adults to get is that idling your vehicle needlessly around them is no longer acceptable behaviour. Just like second-hand cigarette smoke. The news and science regarding greenhouse gas and air pollution (like cigarette smoke) grows grimmer each day while nearly one in five kids in Nova Scotia now has asthma (Lung Association of Nova Scotia).

The town is focusing part of its awareness campaign in locations where kids are most vulnerable and where their parents needlessly idle the most; schools and sports facilities. No-idling signs are being posted at the towns rink and indoor soccer stadium. 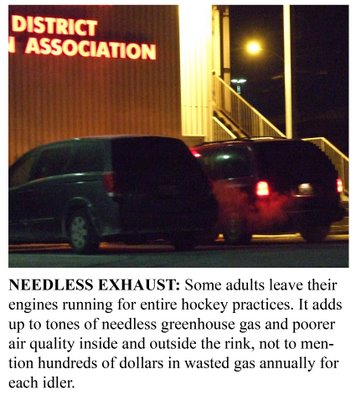 Is idling simply a “smoke screen” issue to divert attention from other areas where emissions may be greater? Not at all. In fact, The Children’s Clean Air Network would argue that a public commitment on idling is one of the most important that government can make at this time. It has the power to set off a chain-reaction of public support.

Cleaner air and cutting emissions is the number-one issue for Canadians. They’re asking to be educated and led on actions they can take, right now. Turning off a car or truck is the easiest thing to do that can have an enormous collective impact. There’s no need for a hybrid car, a retrofit, or an incentive program. Just turn your key off whenever you can.

And, an important thing happens once someone embraces the relatively easy habit of turning off their vehicle. They’re captivated by the fact that they’re part of a collective solution instead of a collective problem. “Hey, this wasn’t hard to do. Where else can I make small changes that will have a big impact?”

They feel they’ve taken ownership and action and want to do more. They begin to demand that their government and businesses do more.

It’s why idling is considered the “lost leader” of environmental action. It draws you into action and buy-in to do much more, providing a means of action and positive reinforcement right away.

Lastly, the mayor’s words are valuable for simply focusing on children as a reason for taking action. This goes right to the heart of the success that The Children’s Clean Air Network has achieved so far. Adults will buy-in much quicker when children are the message and the messengers.

That’s why this video was created to launch The Children’s Clean Air Network this past September. Please forward it on to as many adults as you can.